Trying to see beyond our sometime preoccupation with evil and death, Rabindrarath Tagore pictures for us the young child learning to walk, who has “an impetus of joy which sustains it in its seemingly impossible task.  We see it does not think of its falls so much as of its power to keep its balance though only for a moment”.  He weaves the physical and the moral in his exploration of weight: because life is movement we can overcome weight – “we lightly bear our burden… When we take a pitcherful of water from the sea it has its weight, but when we take a dip into the sea itself a thousand pitcherfuls of water flow above our head and we do not feel their weight.  We have to carry the pitcher of self with our strength”.  Overcoming self – physically, emotionally, spiritually – leads to overcoming weight – and perhaps the other way round too.

How can we lighten the burden of the self?  We can try to cast it away, to see ourselves just as part of Nature, immersed in the motions of biology.  But selfhood came, in the West, with the impulse towards freedom, towards making our moral impulses our own.  We may be perplexed how this new dimension enters the biological, but it feels real, it feels our own.  We have escaped duty and tradition and are discovering love.  This brings the lightness of personal conviction and idealism.  This is both fulfilment and emptying of the self, potentially.  But with selfhood also comes the possibility of a different emptiness, a loneliness, which we may try to fill with ‘noise’ of some kind.  In traditional Eastern paths of spiritual development emptiness will help to free the seeker from illusions of separateness.  But for us today what are we to do with the energy of the self?  Is there a modern way of releasing it which doesn’t lead to desolation or dissolution?

I think the image of the Silent I can be helpful in describing the path which honours and fulfils our strength of self, a path of clarifying.
We are drawn inwards, to our inner life, our feelings, and we are strongly directed towards participation in the world.  We participate through work and social engagement but also through the need to understand the world through science or to express meaning through Art.  These two directions – inner and outer – are both very strong today but also need reconciling in a third dimension, which I would characterise as a state of rest, or silence, in which we sustain our own unity, our own rhythm of inward and outward activity.

I think that for us today there are three qualities of the life of the self which compose this place of silence.  It accepts suffering into beauty and personal growth.  It stays true to the particular, avoiding abstractions.  And, thirdly, out of these two commitments it allows the self to disappear into, and then emerge “out there” in our experience of the world. 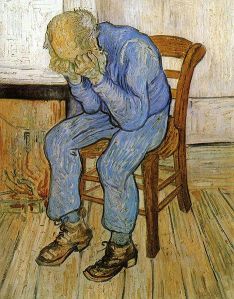 Old Man in Sorrow (on the Threshold of Eternity), Van Gogh

I will use the life and work of Vincent Van Gogh to illustrate what I mean.  He is the tragic pioneer of the life of the Silent I.  He is no genius of natural talent; he works in a faltering and clumsy way in his early drawings of peasants and miners, working away to empty his mind and eye and hand so that ugliness and suffering become beautiful in the giving of himself.  The drawings and paintings are not observations, but recreations, emerging out of the silence of the I.  There is a picture which has the title ‘Old Man in Sorrow (On the Threshold of Eternity)’ which has an old man, head in hands, sitting by a fire which can no longer warm him.  But the fire of the artist’s self, living in the work, gives new life to the old man.  Look at the famous ‘Blossoming Almond Tree’ which Vincent painted for his new-born nephew whom his brother Theo had named Vincent.  In the blossom bursting from the bare branches we see the creative being, the act of the artist.  He is in the fragile beauty.  He is the tree though he has disappeared into it.  These paintings are his offspring as he implies in the letter to Theo found on him after he had shot himself.  He says, in that last letter, that some of his paintings “retain their calm even in the catastrophe”.  Not long before, in a letter to his mother, Vincent, after describing one of his last paintings of wheat fields and open skies, adds, “I am in a mood of almost too much calmness”.

The effort became too great to sustain this place of calm and silence which let him hold and channel the energies of the self.  One can see, in other artists, then and since, different ways of expending this creative potential – in wildness or noise, hallucination or intoxication, in dream or the absurd, in coldness of form or wit.  But in an artist such as Vincent van Gogh I see someone who is preparing the way for us to find more sustainable and loving ways to clarify the self.  We do not have to hover on the edge of breakdown or suicide, but can be everyday workers with the silence of the I, moving lightly between inner and outer worlds.  For us today loneliness and communion are not simple opposites, alternatives.  We find each through the other and the way between them is this silence, which, although intangible, belongs to us as bodily beings who are always, here and now, in some particular place, some particular moment.
One way to imagine the nature of this silent I – to experience its energy and its power – is to think of the heart, the functioning of the heart.  The first European to understand the circulation of the blood through the lungs was a Spanish physician, Michael Servet, who was burnt at the stake in Geneva in 1553 at Calvin’s instigation.  His crime was heresy, but related to his anatomical insights.  For him the blood which flows to the lungs, and then back to the heart, brings the divine spirit, the enlivening air, right into the core of each of us.

Anatomy is suggesting individuality.  One stream through the heart is leading blood to be renewed in the lungs, the other is leading that refreshed blood to circulate through the body.  The two streams are one, but in the heart is the crossing place of that figure of 8 where they are separated only by a thin partition.  In this organ of continuous, tireless rhythmic movement there is also the sense of a self-unity, a self-rhythm, a centre of presence, keeping self and world apart yet one.

Silence is more than stillness and listening can only grow out of silence, and by listening I mean the opening to the inwardness of what and whom we meet, and of ourselves.  Out of this listening comes the lightness which Rabindranath Tagore offers us.  Simply as we walk or carry something, we allow ourselves to be moved, to be carried by the life that is in us and which surrounds us.  That is an act of individual imagination, of the silence of the I.
Introducing the structure and functioning of the heart was not, I believe, just a fanciful analogy.  Guiding the interchange between inner and outer directions of our selfhood, finding the quality of silent rest which separates and integrates them – this business of the self is helped by our bodily awareness, physical movement, by participating in life, by natural rhythms and circulations.

“The same stream of life that runs through my veins night and day runs through the world and dances in rhythmic measures… I feel my limbs are made glorious by the touch of this world of life.  And my pride is from the life-throb of ages dancing in my blood this moment.”

This entry was posted in Essays. Bookmark the permalink.